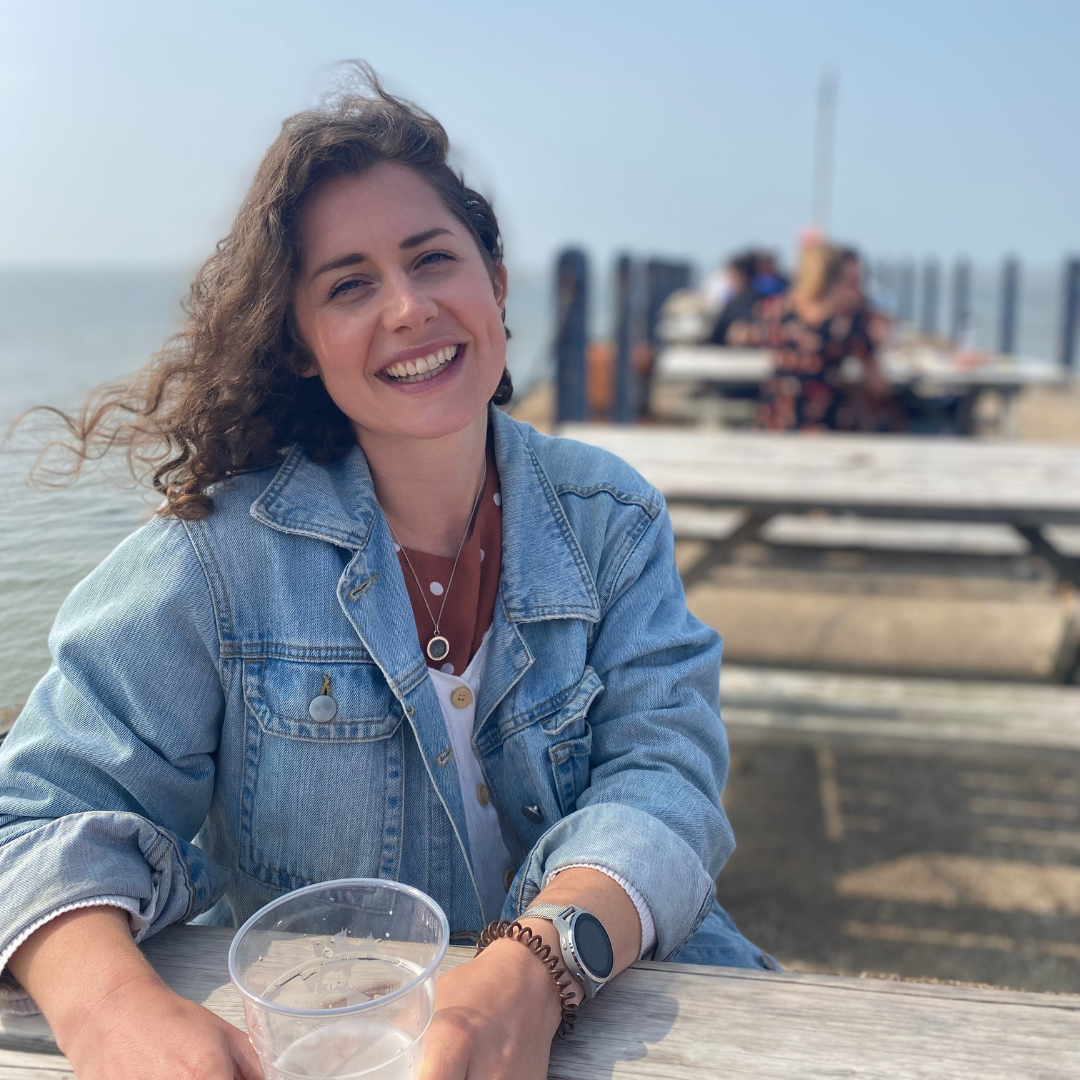 It’s that time of year again, new year, new me and all that. You’re feeling like you need a bit of a ‘detox’ but it’s cold outside and green juice really isn’t going to cut it. Instead of pitching for the latest January detox diet, why not try some of our low carb winter warmers. Gousto’s nutritionist and recipe developer, Ellie Bain shares three of her favourites, sure to leave you feeling lighter without feeling deprived!

They’re all less than 40g of carbohydrate, low in saturated fat and under 500 calories (including added oil) so you can activate those new year good intentions! 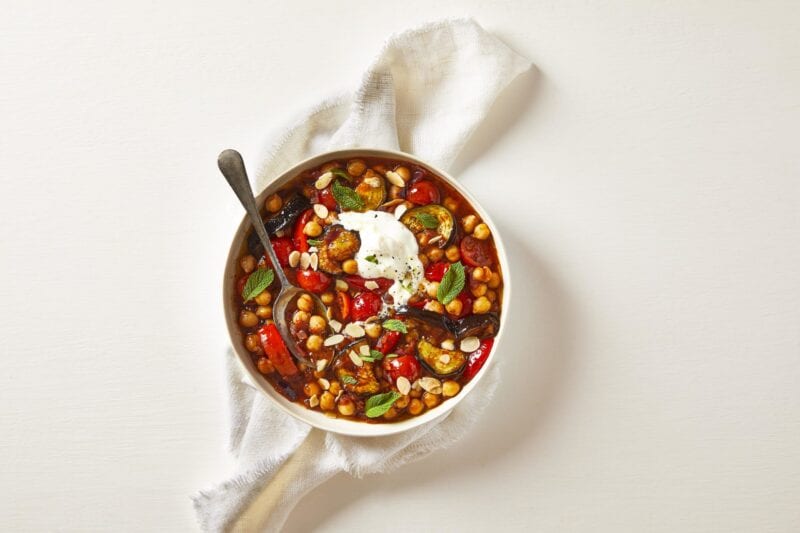 This vegetarian stew is high in protein from chickpeas and fat-free Greek yoghurt, great to help keep you fuller for longer. It’s packed with veg, containing 4 of your 5 a day, from peppers, aubergine, cherry tomatoes and chickpeas (yes, they count! Half a tin is one portion but more than that and it won’t count anymore!).

You’ll roast all the veg first which gives extra depth of flavour and brings out their natural sweetness. You’ll then add it all into the stew which is spiked with harissa – an authentic North African spice paste of peppers, chillies, herbs and spices. It packs a satisfying punch which is sure to leave you satisfied! 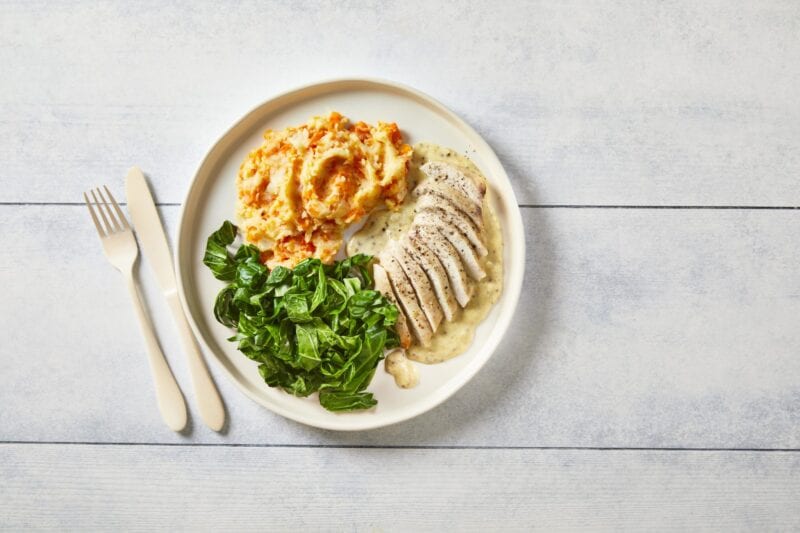 French cooking certainly isn’t the epitome of healthy food. But this low carb version of a classic French dish is high in protein from lean chicken breast and it contains two and a half portions of veg, two are hidden in your mash!

We’ve swapped buttery mashed potatoes for a lighter carrot and parsnip mash (and go easy on the butter!). This root veg version is naturally sweet and adds another flavour dimension, pairing perfectly with the tang of the creamy mustard sauce. To keep this dish light whilst still indulgent you’ll make the Dijonnaise sauce using soft cheese instead of cream, mixed with both wholegrain and Dijon mustard. It’s hearty and wholesome, a perfect post-Christmas antidote! 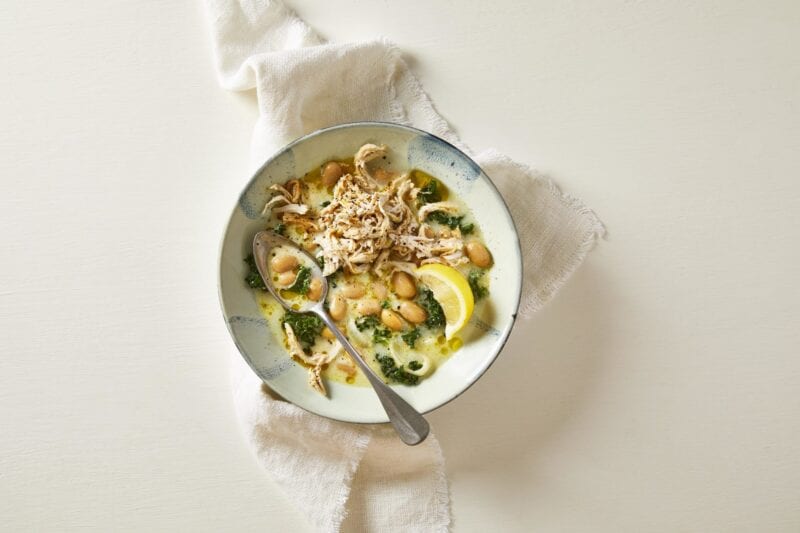 Nothing says winter warmer better than a bowl of comforting chicken soup. Our version is a flavoursome broth, thickened by mashing in some of the butter beans, and packed with the zing from lemon and garlic. It’s chock full of shredded chicken breast plus three of your five a day from the butter beans, onion and kale.

And, would it be January without your annual injection of kale? This recipe is the perfect way to get it in. Leafy greens, like kale, are a great source of antioxidant vitamin C and vitamin A, both of which boost your immune system and help ward off those January sniffles! Plus they contain the B vitamin folic acid – essential for forming red blood cells, these carry oxygen all around the body, helping with energy levels, especially through these darker months!

Just what you need on a cold, winter’s evening, plus you’ll cook this up in just one pot!