After a particularly garlicky team lunch at Gousto HQ a few weeks ago, it became clear that nobody could agree a very important thing: How do you get rid of garlic breath? Even a Google search didn’t seem to come back with anything conclusive – it seemed that almost anything and everything has been championed as a cure for garlic breath…

We decided there was only one way to know what actually gets rid of garlic smell – we’d put it to the test. After a bit of research (and a surprisingly heated debate), we picked out 6 of the most popular cures we could find online and prepared our not-very-scientific experiment.

This was the experiment:

Note: We offered Lewis professional help after the experiment, but he actually seems to have recovered quite well.

Watch our test in full in the video below:

So there you have it – were the results what you expected? There were definitely a few surprises in there that we didn’t see coming! Take a look at the table below to see all the results in order of effectiveness: 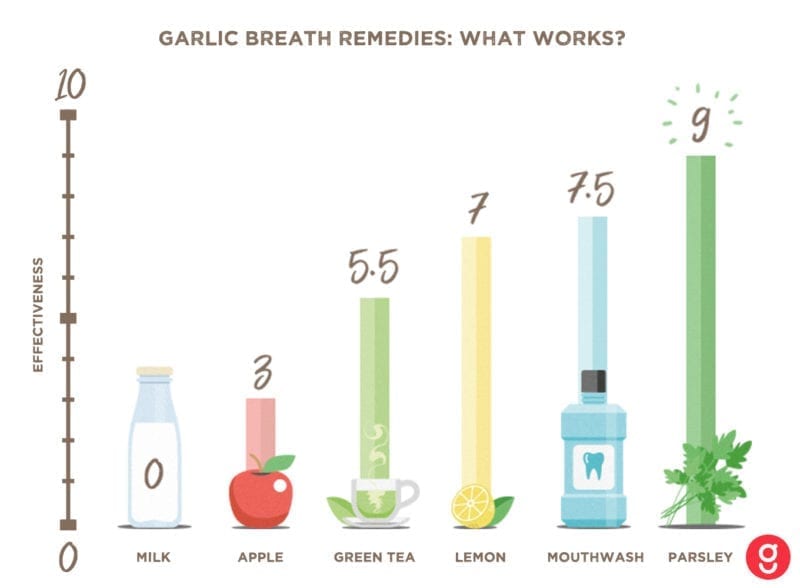 Why we chose it: A 2014 study carried out by researchers at Ohio State University, and published in the Journal of Food Science, reported that eating an apple would reduce the potency of garlic breath. Apparently, the oxidising enzyme in apples can deodorize the sulphides in garlic.

Did it work?: From our (admittedly less scientific) study – not very well.

Why we chose it: Parsley is one of the more traditional remedies for garlic breath. Conveniently, it’s also a herb that appears quite commonly in recipes with garlic. With fresh basil and fresh mint also recommended as cures for garlic breath, we chose parsley to represent the fresh herb cures more generally.

Did it work?: Absolutely. However, the tester did take a massive bite of the stuff. Maybe anything will mask garlic breath when eaten like that! (Apart from milk: see below).

Why we chose it: Green tea was claimed to be a very effective temporary deodorizer of bad breath, in a 2008 study in the Journal of Nutritional Science and Vitaminology. We also really wanted this one to work, if only to give us one more reason to drink more of it!

Did it work?: A little, but it’s not the surprise miracle cure we thought it might be.

Why we chose it: Surely lemon, full of citric acid, would be able to purge some of that stinky breath? Numerous studies had suggested as much. Plus it’s always fun to see someone suck a lemon wedge.

Did it work?: As expected, lemon was a pretty good cure for garlic breath! As restaurants often stock wedges for drinks or garnishes, it’s also the easiest remedy to get your hands on if you’re out on a date.

Why we chose it: We really had to choose at least one cure to represent the classic ‘minty fresh’ approach for getting rid of bad breath in any form. We reckoned mouthwash would be the most intensely minty solution, followed by brushing teeth and chewing gum, so went with the former.

Did it work?: Unsurprisingly, mouthwash did a good job. While its effects may not have lasted that long, there’s definitely a reason why we it seemed like an obvious choice!

Why we chose it: A 2010 study – again published in the Journal of Food Science – found that the high water and fat content of milk may help to deodorize the AMS (Allyl Methyl Sulphide, the compound in garlic that takes the longest to break down) molecules in garlic. But milk and garlic, really? We had our doubts.

Did it work?: The result of our test was a resounding no – the combined effects made the garlic breath much worse, creating a “creamy garlic sauce” odour. That description alone is enough to make us feel queasy.

What did you think of our experiment? While we’re not going to pretend this is the most scientific test out there, we do hope it gives you some inspiration for the next time garlic breath threatens to spoil your evening.

Do you swear by any cures that we didn’t include? Is so, let us know about them in the comments! If you know a garlic obsessive who needs to see this post, make sure you share it with them!

Related posts
This article was tagged as
ingredientsvalentine's day